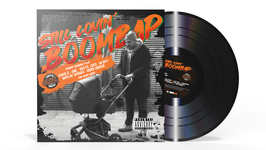 On STILL LOVIN' BOOMBAP, producer Roccwell [Munich, Germany] gathers not only the 90's heroes QnC [Q-Ball and Curt Cazal - the latter from the legendary JVC Force], Craig G and Maylay Sparks but also other hungry underground emcees from the US like M-Dot, Ruste Juxx, Born Unique, Revalation [of EMS], Wildelux, Bankai Fam or Glad2Mecha. It was equally important to him to include scratches in the songs as often as possible, for which DJ Case, 12 Finger Dan and B-Base [Soulbrotha], DJ Danetic [Snowgoons], DJ LP2, DJ Tricky and DJ Skruff contributed numerous cuts.