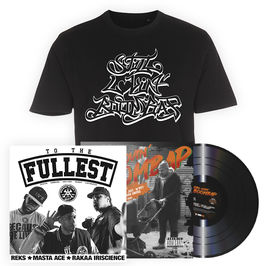 
On STILL LOVIN' BOOMBAP, producer Roccwell [Munich, Germany] gathers not only the 90's heroes QnC [Q-Ball and Curt Cazal - the latter from the legendary JVC Force], Craig G and Maylay Sparks but also other hungry underground emcees from the US like M-Dot, Ruste Juxx, Born Unique, Revalation [of EMS], Wildelux, Bankai Fam or Glad2Mecha. It was equally important to him to include scratches in the songs as often as possible, for which DJ Case, 12 Finger Dan and B-Base [Soulbrotha], DJ Danetic [Snowgoons], DJ LP2, DJ Tricky and DJ Skruff contributed numerous cuts.

Also included in this boomin' bundle, the classic black 180 gr 33,3 rpm 12" maxi-single including 3 versions plus the respective instrumentals of the smasher track “TO THE FULLEST”.
On 12 Finger Dan's original version we got REKS, Masta Ace, and Rakaa Iriscience [of Dilated Peoples]. The Rekless remix features an extra Roger Rekless verse and him plus Boshi San singin' the hook. Scratches by Al Rock. Version #3 was produced by Munich Boom Bap producer Roccwell. And another LA legend stepped up to the mic. Mykill Miers! DJ Aspect, former IDA/ITF champion, did what a dj gotta do.